A few days ago I mused about the recent issue of the fantasy zine, Tobacco Control, that was devoted to “visionaries” talking about how to bring about the elimination of smoking, or its health effects, or the industry, or all tobacco product use — they are not really clear about what they mean by “endgame”.  What is clear, as I noted, is that they did not choose their metaphor well:  The endgame is the phase in a chess match when everything gets smaller, simpler, and puzzle-like, whereas the world of tobacco — pretty static for decades in most populations — is far more populous and complicated than ever before.  Moreover, they tend to use the word to refer to what they perceive to be an inevitable victory, whereas an endgame is only played when victory is uncertain.

In the comments on that post, Chris Price pointed out how absurd the following claim from Ken Warner appears if you stop to think about it:

The continuing scourge of tobacco-produced disease is unlikely to yield to today’s evidence-based interventions.

I did not think about it until Chris pointed out how absurd it is, since it seems to translate into:

We can’t reduce disease with methods that are shown to work.

It certainly does read that way, doesn’t it?  Pretty funny.

Searching for some benefit of the doubt about the statement not being absurd, it might lie in the following.  Taking “yield” as its meaning of “surrender” rather than merely of “back off”, the statement is that the methods will not result in elimination of tobacco use, and thus the exercise in brainstorming to come up with new and creative methods of creeping prohibition.  There are several problems with the claim, even giving the benefit of the doubt about what it really means:

In short, they are trying to identify wild new approaches to win the “endgame” that are not backed by any evidence because the evidence shows that every approach other than harm reduction has run its course.  And harm reduction, well, that just does not count because it is not their approach.  Tobacco improvement is not tobacco control; it leaves tobacco/nicotine users and manufacturers reasonably happy, and we cannot have that.

But the actual endgame is a time when you can think through every move.  In the middle game in chess, you can win with a wild “?!” move (the symbol for a “dubious move” — seemingly stupid, but perhaps a brilliant stroke), but in the end game, a bad move is a bad move.  And having no move at all, well…

The other point that I made is that in the endgame, after most of the pieces are gone, it is mostly about the kings and pawns — the primary stakeholders and the grassroots, to torture the metaphor a bit more.  So add some grassroots and… 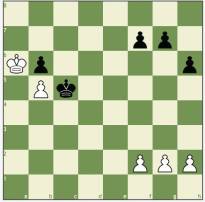 Tobacco control wear the black hats, of course. White or black to move.

It looks like they have just as much grassroots support.  But the little differences like h6 — or, say, the difference between people who live THR or are motivated by wanting to help and those who are only motivated by ignorance and/or hatred — matter.

Postscript (to avoid limiting this post to the few people who are interested in both THR and endgame puzzles, and to either enlighten or bore those not in the second category — spoiler alert for those who want to think through the puzzle first):  The first graphic is the classic illustration of the “zugzwang” situation where someone has to move but any move loses (in this case, that is true no matter whose move it is).  The second graphic riffs on that combination with a contrived position where the winner will be whoever can make the last move with the pawns on the right, forcing the other to move his king.  No matter whose move it is, white can make the last pawn move thanks to the tiny difference in the starting positions.  However, it turns out that this puzzle was crafted with a flaw that the author did not intend, such that black can actually win by abandoning the standoff to the left and bringing the king across to attack the “grassroots” directly at just the right time.  With that cautionary observation, I promise to stop torturing this poor metaphor.

This entry was posted in Lies and tagged endgame. Bookmark the permalink.

5 responses to “More on “endgame””