Simple Simon would refuse to meet the pieman

I prefer to write about science (or those pretending to do science, or those who cannot seem to report on it accurately) and the activities of government actors. I very much appreciate the efforts of those who take on blowhards who just pontificate their opinions, but it is just not my thing. However, every now and then, one of the blowhards says something that is really useful as social science. Case in point, a recent tweet by Australian Simon Chapman.

Many of you are familiar, and there is a flurry of recent posts about him because of the current attacks on e-cigarettes in Australia. Others who write about him often label him Simple Simon. Usually I try to avoid making jokes of people’s names, simple because it is always old material: I am sure that Chapman has been called “Simple” regularly since nursery school. But in this case it was too perfect a fit not to use. For those not familiar with Chapman, just imagine Donald Trump in a very small pond. It is a remarkably close analogy: the apparent seething directionless hatred which seems to be salved by political activism, the frequent assertion of obvious falsehoods, the urge to spend time on personally abusive trolling despite ostensibly being a professional and a grownup, and owing his (socially harmful) success to having impressive skills as a con man.

I will not bother to link the tweet because he blocks everyone who ever bests him at verbal sparring, which I am guessing is a lot of you. It was in the context of the Australian government’s consultation (request for comments and inputs) on their e-cigarette policy, which basically comes down to the question of whether to maintain the current ban. He was arguing (to use the term loosely) that manufacturers and merchants should be excluded, because, according to him:

Here is a screencap (credit for that and for inspiring this post to @K_d_a7): 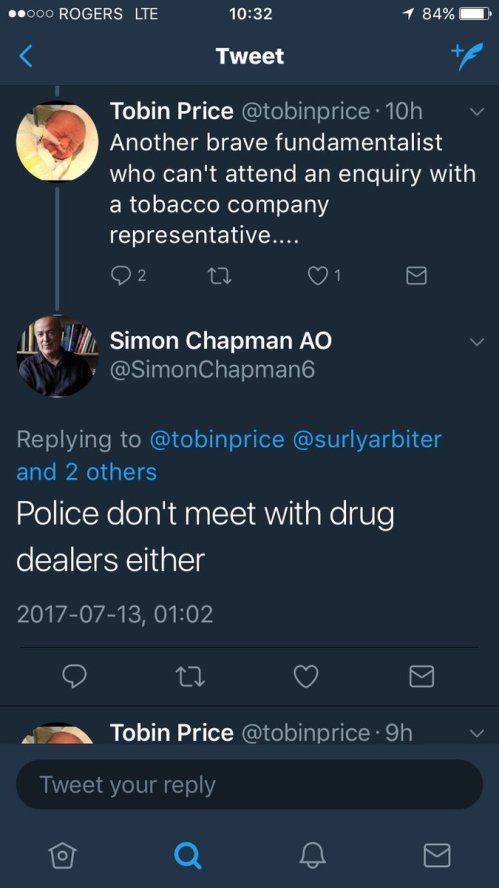 What makes this piece of pontification interesting is not just that it is so obviously wrong, but what it says about Chapman and his ilk.

Of course, police meet with drug dealers. I am not talking about interrogating them or trying to get them to flip on their colleagues — I’ll give Chapman the benefit of the doubt that he meant to exclude such events (though this is charitable, since he did not say so). Anyone who works on the social science side of public health issues that run up against policing — like, say, a sociologist who works in tobacco control — will have read interesting accounts of such meetings. Well, will have read them if he has an agile mind and actually reads, rather than spending all his time pontificating and trolling. My colleagues who focus on fully banned drugs know the details better than I do, certainly, but it is hard to not be generally familiar.

But here’s the thing: You could figure it out even if you were completely unaware of the history of police meeting with drug dealers. A passing familiarity with the human condition would tell you that it must happen. The only time a faction in a political/economic/military/whatever struggle would never want to talk to another faction is if they had absolutely no common interests. This is the case approximately never. Even states engaging in total war still share an interest in, e.g., POWs not being tortured and executed and in letting civilians escape from besieged cities. Only players in two-player board games have no common interests and nothing to talk about. Once you move beyond such games to something that is merely as real-world as a football match, the players and teams have shared interests, such as agreeing to not let the match degenerate into an injury-producing brawl.

Some drug dealers might want to get out of the business. Even if a cop would rather have a charge stick and make them a burden on the state for twenty years, he might still settle for helping them get out (and a good cop would prefer the latter, of course). The police might have an opportunity to encourage dealers to engage in better business practices, such as reducing violence — anything from heading off a gang war to reducing everyday threats to innocent bystanders. They would do this even though this might not reduce the flow of drugs. Indeed, they might do this even if they were fairly sure it would increase the flow, since they do not share tobacco control’s obsessive and antisocial priorities. If the police discover that a deadly batch of a drug is on the streets, they should (and presumably usually do) alert the relevant dealers they know.

All of these represent examples of the shared goals that inevitably exist even between factions who are mostly adversaries. They also have some fairly obvious analogies in the shared goals of the tobacco industry and (real) public health. Only someone with a “death to them all!” attitude — i.e., not someone who really cares about public health, or human beings for that matter — would disagree. We are talking ISIL or Duterte levels of inhumanity. Of course, tobacco controllers have praised both ISIL and Duterte, so that is who we are dealing with.

Chapman is notorious for declaring that anything that tobacco companies object to must be good — he calls it “the scream test”. Who knows whether he actually believes this, or whether he believes anything for that matter — see aforementioned comparison to Trump. In particular, he absurdly concluded that because major tobacco companies object to brand confiscation (plain packaging), citing as reasons that it aids black marketeers and increases sales of cheaper non-name-brand products at their expense, it means that it must be a good policy. Um, yeah. By his logic, since people at tobacco companies are opposed to an asteroid collision exterminating humanity, then that too must be a good thing.

As if to assist my analogy, I ran across this tweet while writing this post, about the discourse in American politics:

"[X] pisses people off so they're doing something right" is the feeblest argument. Pissing people off is EASY. Literally babies can do it

Anyway, the point here is not to observe that Chapman tweeted something that is obviously false. It is not as if that list needs any additions. As with Trump, it is basically an everyday occurrence, saying something he thinks is clever but that just demonstrates he does not understand the world. Well, it demonstrates that to most people — the two men’s bases, which have similar levels of thoughtfulness, presumably eat it up.

But as with Trump or Pravda, there is often something to be learned from content even when you know the goals of the author did not include conveying honest information. In this case, it is insight into tobacco controller’s tendency toward an expansive version of the mirror-image delusion. As I discussed in more detail here, the mirror-image delusion describes people with limited insight who assume that whoever they are looking at across a table is just like them. This has come up in the contest of the Australian consultation, with tobacco controllers accusing everyone who submitted an objection to the ban on e-cigarettes of being a paid shill. Others have written about the obvious irony of people who only act when they are getting paid accusing honest people — who just want the right to control their bodies and use a preferred alternative to cigarettes — of being shills. Chapman’s comment makes clear that his ilk are similarly deluded about everyone’s motives.

They really think they are playing a two-player winner-take-all board game against the tobacco industry, or perhaps against the genus Nicotiana itself. They often appear oblivious to the primary stakeholders, the consumers. But it is really worse than that. If it is a two-player winner-take-all game, then those consumers are actually the enemy. (I explore that theme further in what I consider my best post ever.)

That is not a new insight. But it might mean something somewhat different when considered in the context of thinking everyone in the world is their mirror image. In their mind, everyone acts as if the world were a board game. Cops do not meet with criminals because they have no common interests. There are no peace or disarmament talks. Political caucuses do not negotiate deals with each other. Those doing real public health work — health inspectors and advocates who wish to improve nutrition — never talk with the pieman. Tobacco controllers did not negotiate deals with the major American cigarette companies to create the mutually-beneficial Master Settlement Agreement and Center for Tobacco Products.

Of course that last bit reminds us that tobacco control attracts a certain kind of grifter, who just sees it as a good way to make money (not just in the USA — see also: ASH; also, recall the Trump analogy). But the people who those grifters let serve as their public face are a special bunch for another reason. They are people who never grew beyond the male adolescent worldview that the world is all about two-player board games. They are not just pretending to believe that everyone thinks that way. They give commendations to Duterte not because they are setting aside his ruthless behavior in policing — though that alone would be unforgivable — but because they admire and envy it (note Trump analogy again, though I doubt it is too subtle here). That, to them, is the right way to run a police force, not with all that silly treating all people as human beings who are worthy of concern like this loser.

Needless to say, I am not gleaning all this from one tweet by one serially abusive troll. It is based on a pattern of observation and was merely made stark by that tweet. The fact that tobacco control is a comfortable home for those who genuinely feel that cops should just be executing the “bad guys” is yet another reason why real public health needs to disavow tobacco control just like they do other drug warriors.

My conclusion after six months fact-checking every word out of Trump's mouth: there's no strategy, he's just a liar. https://t.co/is6QEpd1fA

This entry was posted in truths and tagged Article 5.3, Australia, mirror delusion. Bookmark the permalink.

8 responses to “Simple Simon would refuse to meet the pieman”