I intend to write a proper post or two on PMI’s iQos and heat-not-burn (HnB) cigarettes more generally, but haven’t had much chance to blog lately. Those products have very serious potential to be the most important thing that ever happened in THR (and, yes, I know what I said there). For now, I can just do a quick one on the back of a recent post by Dick Puddlecote, and recommend reading it.

DP recounts how ASH (UK), true to form, are marketing their doubt and general anti attitude, trying to block the huge benefits that these products could bring. He invokes my concept of anti-tobacco extremism, and links to one of my posts that invokes the concept. Here is another one, about how anti-tobacco extremism naturally results in stronger opposition to low-risk products than to cigarettes, just as we have seen. END_OF_DOCUMENT_TOKEN_TO_BE_REPLACED

“E-cigarettes are a gateway” is a genuine scientific claim

The latest entrant into the Dunning-Kruger gateway follies is ASH Wales, with this report that is headlined, “New research shows e-cigarettes are not a gateway for young people to take up smoking”. What evidence do they present that supports this remarkable claim that a universal negative is true? None.

The gateway claim, that using e-cigarettes causes some would-be never-smokers to smoke, is a legitimate scientific hypothesis. As such, it should not be asserted to be true (to a nontrivial extent) without useful evidence, especially since it is such an unlikely causal sequence, as I have explained elsewhere. The assertions that gateway effects are occurring have been based on evidence that does not actually show that. This is certainly the major problem in this area. But similarly, the claim should not be dismissed with word games or junk science. In this particular case, ASH Wales — like many others before them — seem to not understand a 101-level point from epidemiology, the difference between “not many people are at risk” and “it never happens among those who are at risk.” They claim that because a large majority of e-cigarette users among teens have already smoked, there is therefore no gateway effect. Um, yeah.  END_OF_DOCUMENT_TOKEN_TO_BE_REPLACED

One of the nice things about having a scholarly blog is being able to write what are basically extended footnotes for papers. Writing anything other than simple lab reports in the health sciences is extremely difficult for real scholars because of the length constraints: pressure to keep papers too short to do serious analysis and the lack of footnotes. These result from a combination of atavism (to fit more papers into 20th century paper journals), a warped sense of how science works (hint: pronouncements from authority), and a fear that if people knew that actual thoughtful analysis was an option the whole enterprise of churning out thought-free claims would collapse. Since I need to reference the ASH results for a forthcoming paper, and because someone asked me about them, here is my assessment. END_OF_DOCUMENT_TOKEN_TO_BE_REPLACED

As you know if you read this post from a few days ago, @TobaccoTacticss is one of the most spot-on critics of the lies and other evils of the tobacco control industry.  The anonymous author is also clearly strong supporter of THR.  Thus, it is in the interests of all of us who dare criticize that rich, powerful, and genuinely evil industry to publicize the fact that ASH UK is attempting to censor that feed.  (I.e., please publicize this, write your own blog about it, etc. to whatever extent possible.)

[UPDATE: This is being done.  Enjoy in particular this tweet and the blog it links to.]

@TobaccoTacticss received the a notice from Twitter that several posts had been removed based on this complaint:

== Where does this Tweet link to?: I have confirmed that the infringing material is available for download at the linked site as of the submission of this notice.

== 512(f) Acknowledgment: I understand that under 17 U.S.C. § 512(f), I may be liable for any damages, including costs and attorneys’ fees, if I knowingly materially misrepresent that reported material or activity is infringing.

== Good Faith Belief: I have good faith belief that use of the material in the manner complained of is not authorized by the copyright owner, its agent, or the law.

== Authority to Act: The information in this notification is accurate, and I state under penalty of perjury that I am authorized to act on behalf of the copyright owner.

Note that the links all seem to still work at the time of this writing, though the images have been removed from the tweets.

Let’s hope that the liability statement there gets put into practice.  As you may know, both the UK and the USA (the relevant jurisdiction is probably California, where Twitter is based) have clear exceptions to copyright restrictions that say that copyrighted material can be displayed (within broad bounds) for purposes of parody or critical analysis, both of which @TobaccoTacticss is clearly engaged in.  Thus this complaint is blatantly contrary to the laws to which ASH is appealing.

But more important, think about the ramifications of this:  The tobacco control industry is so desperately worried about anyone criticizing what they are saying that they will take (illegal) legal action to try to stop it.  They realize they are incapable of defending their claims on the merits.  They do not engage in any public debate with their critics (they will talk to a few pet “critics” in stage-managed settings, but pretend that their real critics do not even exist). Censorship is the tactic of someone who has only power, not truth, on their side.

Since we truth-seeking writers really despise censorship on principal — even apart from liking the content of what was censored — here is my contribution to Streisand Effecting this material.  Please join me in that.

As of right now, three of the perfectly legal parody images can be found at http://imgur.com/a/7RTIH, and the original for the fourth deleted image is at http://www.flickr.com/photos/ashuk/11338567545/sizes/l/ but since that might change too, here they are (and the author of the parodies has declared them to be in the public domain, so do not hesitate to copy and repost): 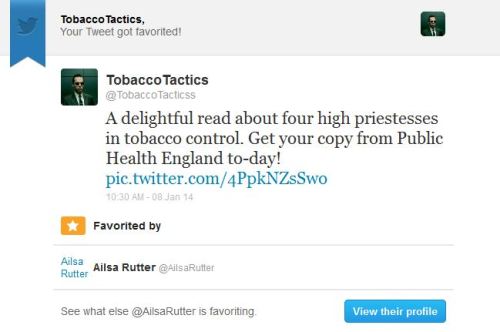 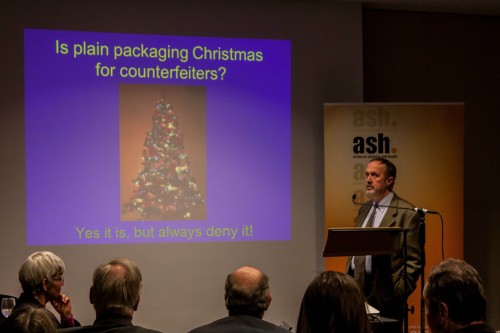 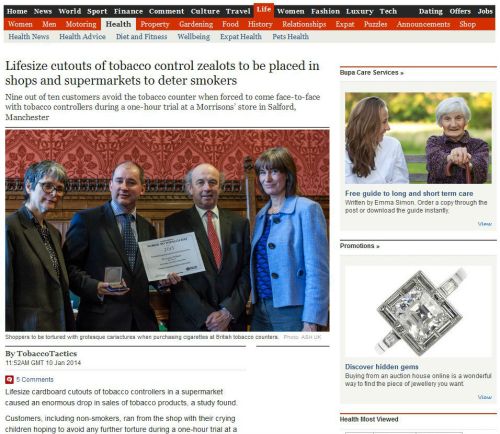 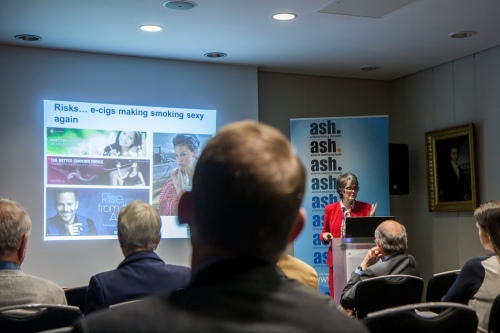 Since wealth and power often triumphs over truth and the rule of law, it seems quite possible that @TobaccoTacticss will be shut down in the near future.  If so, I will be sure to point everyone to wherever it is resurrected.